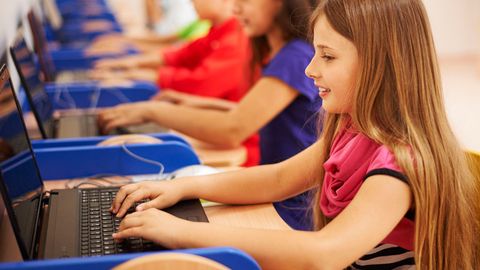 Faster internet is now available in most schools and many libraries across the country. Picture / 123RF

It wasn't long ago that school projects were completed by students referencing an encyclopedia source that they could quote in their bibliography.

In 2010, after 244 years, the Encyclopedia Britannica went out of print, acknowledging its digital competition - Wikipedia and search engines like Google - as the information providers for the 21st century. This trend towards increased digital content was supported by the Ministry of Education this year with their announcement that 'digital technologies' will be fully integrated into the New Zealand curriculum by 2018.

The new curriculum will cover six themes including programming, digital devices and infrastructure, digital applications and humans and computers, emphasising that our children's use and knowledge of technology will increase with time.

Through my work with OMGTech!, a children's education charity teaching digital technology to low decile school children right around New Zealand, I see first-hand how limited some of our children's access to technology is. The problem isn't just in our rural regions either, with 37 per cent of households without internet located right on Auckland's doorstep in Mangere-Otahuhu and Otara-Papatoetoe.

The 2015 World Internet Project in New Zealand surveyed 1377 people, and found that of those who do not use the internet, 11 per cent were prevented by cost, 18 per cent did not own a device that allowed them to connect, and 20 per cent just did not know enough about technology to understand how to connect.

Our education system is starting to expect that students bring their own devices to school, and have access to internet connectivity at home to complete their schoolwork.

Those who are unable to do this cannot participate in the same way as their connected peers, and have less opportunity to prepare for a technology-filled future.

The Manaiakalani group is a cluster of 12 decile one primary and secondary schools in Auckland, created to give students equal access to information regardless of their socio-economic background.

The programme ensures that every child receives a laptop or tablet (which is paid for by their parents over time), wireless internet at home, and classroom education with teachers who utilise digital technology. In its first year, one member school doubled its NCEA level 2 results for Māori and Pasifika students and there have since been many positive academic improvements seen in the participating schools.

This week Spark Foundation announced their social change initiative Spark Jump. Collaborating with community groups and government agencies, they are planning to roll out a programme which offers families at risk of digital exclusion access to entry-level home broadband for about a quarter of the usual price.

There is no doubt that technology is here to stay - learning digital literacy is as important as numeracy and literacy. As New Zealanders we cannot achieve excellence in education without equity. Those lacking digital access are at severe risk of being left behind.

Thanks to the Government's $2 billion UFB rollout this year, faster internet is now available in most schools and many libraries across the country. With further expansion of the Manaiakalani programme to schools in other regions as well as this new low cost home internet access, let's hope that the digital divide is now on a narrowing track for the next generation.